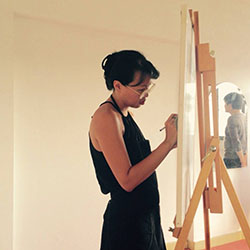 About the artist
Yanyun Chen works in charcoal. Her studio-based drawing practice is driven by questions and the craft of working in charcoal. Her first exhibited series Chasing Flowers challenges the “still-life” genre, by drawing portraits of flowers as they wilt. They are representations of time manifested in the changing conditions of decaying flowers, yet culminating in what appears to be unmoving still-life drawings. This led to explorations in the mythologies of flowers in her ongoing series Poppies. In the 2016 Horn Trio concert at the Esplanade, Yanyun presented her Experiments with Johannes Brahm’s Horn Trio Movement 1 – 4 shown alongside the performance of Brahms’ compositions. Her drawings have been exhibited in Singapore, notably at ChanHampe Galleries, Visual Arts Development Association Singapore, Jendela (Visual Art Space) and NoiseSingapore.

Aside from drawing, she does research navigating minor gestures, with particular emphasis on themes surrounding blinking, and nudity. She received her Ph.D. at the European Graduate School in Switzerland, where she also obtained her Masters in Communications. She received the Lee Kuan Yew Gold Medal Award and the Nanyang Scholarship for her Bachelors in Fine Arts [Hons] 1st class from Nanyang Technological University (Singapore); and has been trained at the Florence Academy of Art (Sweden), The Animation Workshop (Denmark), and under puppet makers Miroslav Trejtnar and Zdar Sorm (Czech Republic). She has published books including 50 Drawing Exercises (co-written, published by Ministry of Education, Singapore), Tracing Etymology: Origin and Time; Monsters and Demons (published by Atropos) and It’s Fiction (co-written, published by Delere Press). Jimmyfish, an eco-awareness flash game built by her team, was awarded the Jury Selection in the 15th Japan Media Arts Festival, 2011.

Currently, she teaches drawing at Yale-NUS College, National University of Singapore and at the School of Art Design and Media, Nanyang Technological University, in Singapore. She is also the co-founder and managing partner of publishing house Delere Press LLP, Singapore.

Other artworks from author