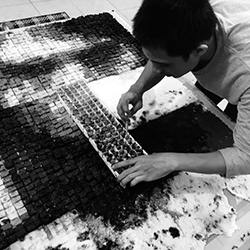 About the artist
Widi’s artworks highlight the essence of paper and it’s process of creation as he brings new conceptualization of materiality to his art, he sees paper as a functional material with a historical legacy that keeps connecting the past, the present and the future. Thus, paper, as a common medium of art practices has triggered Widi to explore its potential by examining, analyzing and modifying its materiality in respect to archetypal, essential character. This essentialism of medium is seen as a reduced form of art which emphasizes a presentation of its materiality, Simultaneously, the monochromatic color (black, white and their derivative colors) is applied to represent a multi-dimensional distance between reality and its void.