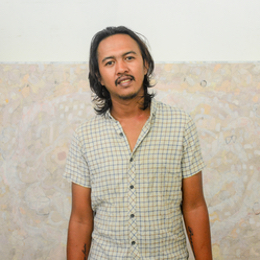 About the artist
Wayan Novi is a young artist recognised for his persistence in manipulating the eye’s insensitivity in examining details, though the implementation of a collection of marks and dots that creates an impression of his imaginative natural landscape. His works are a marriage of folk art and pointillism, born as a deformation from the tradition of still-life painting which has been his vision since childhood. The development of Wayan Novi’s artistic practice grew alongside the rapid development that occured in Bali; both became inseparable. His pictures develop from the memory of the beauty of nature as subject matter. The peculiarity of his work is the stylization or the composition of nature in a painting, and his expertise in creating density on a flat canvas, resembling a form of hallucination via the colour gradations. Since his debut, Wayan Novi’s work have been collected widely around the region.