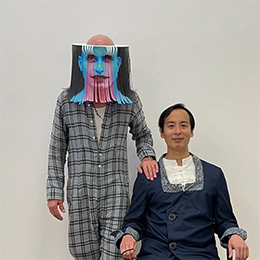 About the artist
Gary Carsley lives and works on Wiradjuri country, 200 kilometres west of Sydney where he maintains a modest hortus conclusus and a practice propagated at the intersection of the paradigms: artist, writer and contrarian. His recent solo projects include The National – New Australian Art (MCA, Sydney) 2017, the 9th Asia Pacific Triennial of Contemporary Art (QAGOMA, Brisbane) 2018-19, Chromophilia (ICAA, New York) and Terra inFirma: Sovereignty and Memory, (Blacktown Arts Centre), both in 2020.

Renjie Teoh is a registered architect practicing on Gadigal land in Sydney and has been working in an expanded mode of practice since 2018. After graduating with a Bachelor of Arts in Architecture (Hons) at NUS Singapore, and Master of Architecture at UNSW Sydney, he continued to gain industry experience with various Architectural firms in Australia while concurrently consolidating his own architectural and interior design practice under the name architecTONICA. In 2019, he completed his first solo project Object into Subject: Studio of Quiet Contemplation, at FIRES, a Sydney based ARI.

As artist and architect, Gary and Renjie initially colluded in 2018 on a major site-specific commission for the National Gallery of Singapore. Composed of more than 7,000 overlapping A4 80 gsm photocopies and co-authored with Jeremy Chu, The Regency Made Me Blind rises vertically along the entirety of the Gallery’s City Hall Wing staircase and is currently on view between levels 4 and 5. After identifying their mutual obsession with building and gardening typologies, Gary and Renjie went on to design a second large scale A4 photocopy environment: The Pavilion of Clear Memory when scene from Waverley. Commissioned by Waverly Council, the Pavilion of Clear Memory also included significant contributions from Waverly’s St Clare’s College year 12 Art students and community Gardening activists. It was installed at Sydney’s iconic Bondi Pavilion, over the winter of 2019.

Their first dioramic experiment at showing individual art works integrated within a wider set of visual references drawn from life came the following year when Renjie confabulated a multi-perspectival pergola for Arbour Ardour, an exhibition of Gary’s recent Draguerreotypes at the internationally renowned Roslyn Oxley9 Gallery. The percussor to the Flutterbye Mansion, Arbour Ardour was an optically dazzling viewer experience in which three of Gary’s signature IKEA PAX closet parkscapes and a suite of polygonal images, were schematised by Renjie as a series of multi-perspectival, outward looking windows and doors. (Draguerreotypes is A term coined in 2003 by German Art historian Rafael von Uslar to describe an ongoing body of works by Gary Carsley in which Carseley overwrites the chromatic and tonal properties of a photograph with a corresponding palette of wood veneers. By adding an “r” to Daguerreotype the term for the original photographic process Von Uslar positions claims these works for an alternative history.)

Resolving to operate outside the Western convention of displaying and viewing art as mainly fragments set on and within predominately white spaces, led to a formalisation of their hitherto improvisational dialogue and the promulgation of the ArtHitects. The ArtHitects identification as culturally non-binary enables Gary and Renjie to better reflect and work within the diversity of the blended communities that increasingly characterise the contemporary global metropolis. The ArtHitects, as a framework for their working together simultaneously facilitates a synthesis of their different cultural backgrounds and generational outlooks while furthering the evolution of their separate practices as artist and architect.

In 2021 the ArtHitects, presented Savour Labour – the Brick Veneer Belvedere at Cross Arts Projects (Sydney), a centre for curatorial projects focussed on exploring the multiple relationship between art and life, concerns also vital to them. In 2022, they produced the Illawarra Pavilion, a commissioned project by the Wollongong Art Gallery, in which they applied 3,563 overlapping A4 photocopies over 21 consecutive daze to the gallery wall to confect a Perspectival Scenic Panorama (通景画). Incorporated seamlessly within the pavilion’s 61 linear meters were selected items from the Gallery’s consequential Mann-Tatlow Collection of Asian Art and Antiquities.

The complex set of novel cultural and historical interrelationships produced by the ArtHitects production of perspectival scenic panoramas purposefully generates an original context for exhibiting their new creations as individual artist and architect. Institutional projects confirmed for 2023 include Braving Time: Contemporary Art in Queer Australia (the National Art School, Sydney) and Parlour Parléur for the Museum of New South Wales History and Penrith Regional Gallery.

Selected Public Commissions
2017 The Regency Made Me Blind, The National Gallery of Singapore, Singapore (as the ArtHitects)

No Artworks were found matching your selection.