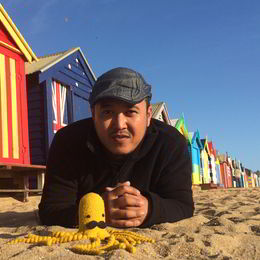 About the artist
Jogja-based Mulyana was educated as an art teacher and  learned knitting and crocheting at the famous book shop collective Tobucil in Bandung. Mulyana experiences the act of knitting or crocheting as a form of meditation and prayer. His pieces begin their lives like small organisms, the modules slowly blooming with quiet contemplation into vividly colored clusters of queer forms that seem to hold together tightly, as if a pulling force was binding them relentlessly with invisible strength. These islands were aptly titled, Sister island, Coral island and such, ironically prompting us to recall coral life on the seabed, instead of man-dominant or artificially reclaimed islands. As you draw closer to peer into the multitude of tiny eyes poking out of the coral-like forms, cute as they may seem, their intimate presence sucks you into their microscopic world of tactility and a parallel life – a channel to transcendence?

In 2008, Mulyana created his alter-ego, the Mogus (Monster), alongside the Gurita (octopus) and Sigarantang (Mulyana’s clan name). The Mogus is made of knitted pompoms from unused bulky yarn, adapted from images of marine life with its beautiful diversity and mystery. Mulyana’s fantasy is to “have many hands, then I can do many things, and give to many people”. The Coral islands series represent The Mogus’ homes – domains, a safe places of refuge, which is a basic human need. “In God’s eyes, our being in this life is to eventually go to a beautiful place,” says Mulyana for whom art making is a privileged way of “showing gratitude to our Creator who gives him a sound mind and a healthy body to be part of life on earth”. Often, Mulyana speaks of his work with vigorous reference to spirituality and a sense of a higher being guiding his act of creation. Deeper layers of interpretation lie in these vibrant and eye-catching soft sculptures – do we not forget that corals live and breathe a life of their own? Despite looking dormant, harmless and nonchalant, corals provide an optimally suitable environment for underwater plants and creatures to live on, live in and find refuge, like a giant rock that shelters the weak from turbulent ocean conditions and life-threatening mammals. Just like how insects, plants and birds have their methods to live self-sufficiently without the need for human intervention, the corals can be seen as a god sent gift to sustain the lives of other creatures, naturally.

When Mulyana moved to Yogyakarta in 2014, he was trying to find something interesting for a community-based project. He was then introduced to a transgender community in Sorogenen village – a very small community, but unlike in other regions of the country, its members seem to be well-accepted by the public. Together with this community, Mulyana produced multiple soft sculptures in his signature style, pathing the way towards the world stage where his works were finally presented to a global audience.

While Mulyana says he did not set out to overtly make a point about gender and sexuality with his intricate soft sculptures, it is possible to read the Coral islands as an attempt to negotiate the fluidity of bodies and identity. Floating on invisible seas, each with their individual desires yet anchored to one another, Mulyana’s corals represent the desire to move beyond arbitrary labels that devalue us as human beings; in favour of a useful, multi-armed, multi-gendered identity that can contribute to the lives of our fellow human beings. In Silent Prayers (2017), a knitting installation of large white corals suspended from the ground, warm lights embedded inside the corals glow and fade with the slow passing of time, transforming the intimate space into one of meditation and calmness. Mulyana kneels at the front, dressed in a white uniform, eyes closed. His message to the audience: A prayer is a hope. Life must be filled with prayers.