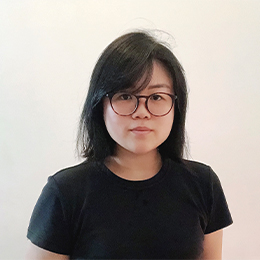 Fiona Seow (b. 1992) graduated from Nanyang Academy of Fine Arts with a Diploma in Fine Art (Sculpture) in 2015. Her works were exhibited at the 2015 edition of Affordable Art Fair and Singaplural. She was the recipient of the Tan Chay Bing Scholarship (Diploma) in 2014 and was also awarded the commendation prize for NAFA Fine Art Graduation Awards in 2015. She was selected as one of the winners of Affordable Art Fair’s Young Talent Programme, in collaboration with ION Art in November 2015.

Fiona has exhibited both locally and internationally. Her works were exhibited in National Design Centre for Singapore Art Week 2019, Only Connect – Creative Centre Osaka and also at BACC Bangkok for the 5th International Drawing and Print Triennale. She recently had her first solo showcase at Esplanade earlier this year.

Fiona works are primarily driven by an obsession with perfection and order, coupled with a compulsion to repeat. Her geometric abstract drawings and installations are the by-products of various processes that she engages in to achieve a meditative state or a sense of pleasure.

The themes that Fiona often deals with include – Time, Existence, Labour, Temporality and Continuity. It is through the act of repetition that she is able to find peace and assurance. Mathematics is a constant that she finds assuring; working with geometry allows her to find order amidst chaotic and conflicting ideas. She often employs the symbolic meaning behind geometric shapes in her works. For example, the circle symbolises perfection, cyclical time, and on a more spiritual level it is also linked to continuation of life and beyond. Triangles on the other hand, are the most stable shape that allows tessellation and multiplication, which can be translated into growth.

While most resolved works appear to be visually “clean”, there is often a dark undertone that questions the purpose of her existence. Her process is an ongoing debate on how time, labour and the returns relate to one another. It is also through these processes that she finds meaning in art making – What is it worth? She is currently working on various series of durational works.