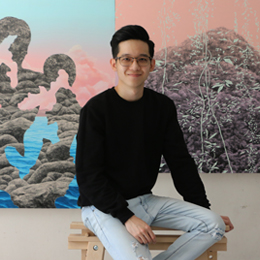 About the artist
Winner of the prestigious 2017 UOB Painting of the year (Malaysia) Competition, young Kuala Lumpur based artist Chok Yue Zan is an emerging force in the contemporary art world. Born in Tauwar, Sabah, Zan grew up with his grandparents, in a forested environment surrounded by lush greenery and breathtaking sceneries. It was his sanctuary, a space of unbridled happiness which he considers his lost paradise. His art is inspired heavily by the nostalgia of said paradise and the singular theme of past, present, and future. Zan believes that one’s memories of the past can have a very tangible effect on one’s future.

In his craft, Zan explores various media in a contemplative and conceptual approach. He constantly questions the origins and functions of different materials, and is a proponent of mixing and combining different materials and art techniques to form a unique visual language. His modus operandi of consummately balancing creativity, emotions and technicality makes him one of the most all-rounded and exciting young artists in our region today.