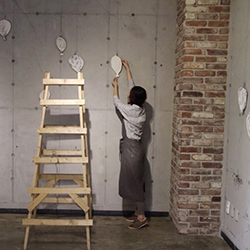 About the artist
Choi Su-Mi’s “house-making” work includes many different processes, such as performing “plastic surgery” on the houses, mixing color pigments and applying glaze. What is more important is that these houses were not built in the blink of an eye but resisted the tremendous heat of more than 1,200°C. They connote many stories of hers, including periods of hardship and the subsequent patience she exerted to overcome various situations. Choi Su-Mi’s motive for these “house work” began with her realization that the way we lead a life through marrying and establishing a home embraces all aspects of our sentiments; joy, sadness and frustration inside the fence called “a house.” In other words, a house can be considered a space of stories and communication shared by all of us.

Choi Su-Mi’s work expresses a house of everydayness where common people reside. They are not about the tall buildings observed in the modern-day cities. It is about a house where you arrive for a good rest after having finished a long daily work full of busy and tiring duties. In other words, the fact that you have a place called “your house” already brings you a feeling of comfort and each one has his or her own story of a place where one’s energy can be recharged. It sometimes becomes me, and sometimes you; it turns into a landscape at times; it also transforms into a city. For this reason, a house becomes a human, a form of life. It designs and creates a life, and becomes a space of language. In such a space, the stories keep developing day after day, today, tomorrow…