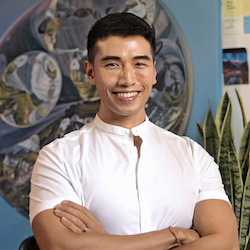 About the artist
Aiman is an interdisciplinary artist, a graduate from Lasalle-SIA College of the Arts class of 2004. He has had three solo exhibitions in Singapore—the most recent one held in Nov 2021 (The Significance Of It All Is The Insignificance Of It All) and the one before that in 2018 (The Evolution of Eian & Eien). He has also previously participated in art fairs and exhibitions both in Singapore and overseas, including Art Stage Singapore and Jakarta (2017/2018), the National Art Gallery of Malaysia, the Sunshine International Museum, in Songzhuang, China, and alongside Indonesian artists as part of Jogja Open Studios. Aiman’s current practice explores the process of self-actualisation and individuation, through paintings, performance art, installations and new media.